Take A Chance And Support Those That Support Us. 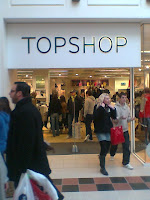 Christmas with the family was wonderful, four days of food and laughter. A lot of fun but now I'd arrived back in my wife's home town and I ready to buy some music.

Sure, I can get most stuff back home and what I can't find I can always order online, but some of the more obscure stuff is not readily available in Australia and the postage from the UK can be as much (or even more) than the disc. So I decided to grab some of this stuff while I was here and save on the postage.

Last week in Glasgow I was in a fantastic independent music store, and they had some of the stuff I was looking for - but it was more than I expected to pay and the queues at the registers were very very long. So I decided to try again after Christmas, when I was down in England.

But here in my wife's town there isn't anything independent, and the chain store was the same as the other chain stores all over the world.  They had very little I was interested in. And then it occurred to me that this one store, this one chain pretty much controls the music the people in this town listen to.

Then I realised it wasn't that different to where I am in Australia. I am a little better off though, because I'm in the suburbs rather than a town, so I can get a little more by traveling a little further afield. And there is one reasonably local chain that has a fairly good indies and alternative section.

That's only one of the reasons why crap rules the airwaves and I don't listen to the radio.

Go into an independent store and buy some music you wouldn't normally listen to.  Take a chance, or play before you buy.  Help the independents, both stores and artists, and get some music with some bite.

Have fun, and enjoy the holidays. Topshop, Topshop.
Posted by Steve Cameron at 6:25 PM